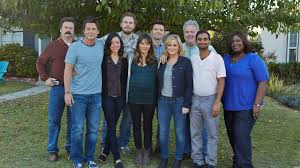 If you know me at all thus far from reading these blogs, you know that I LOVE everything that is Parks and Recreation. Earlier this year, I read Amy Poehler’s book Yes Please and there was a chapter called Lets Build A Park. Little did I know that Amy Poehler would convince to watch Parks and Recreation on Hulu. I never got the chance to watch the show when it was on the air for what reason I’m not sure but I’m so happy that I got a chance now. Leslie Knope is someone that I admire and strive to be every day minus the binders and scrapbooks. Although, it shows great organization. But enough of that, I have watched all the seasons except for season seven. I am planning on watching it tonight…I just don’t want it to end. These people have become my friends. Well in my head. Anyways, I don’t want to say goodbye to Leslie, Ann, Ben, Chris, Ron, Tom, April, Andy, Donna, and Jerry. But I know that once I finish the season I will still see them around. Aziz has a show on netflix called Master of none that looks really good. So I’ll be watching that for sure and it may not the same as being in Pawnee, Indiana but I know that I get to see Aziz. So tonight I will be watching season seven of Parks and Recreation and live tweeting. If you would like to follow along, follow me on twitter @amycat728. Also I apologize for the tweets about Aziz Ansari. Not really.

Fun fact: the picture above was the actual picture Amy used at the beginning of the chapter.